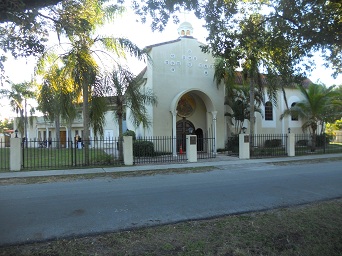 In the summer of 1973 a group of people, decided to start a Greek church in Hollywood. Some said there were not enough Greek people in the area to support a church. Some said they went through the local telephone book and found more than one hundred Greek family names. Then it was decided to send everyone a letter.

However, we had no funds to purchase stationary, stamps, etc. Someone suggested to pass a hat around for donations. Mr Billis used his hat and enough money was collected to send out the letters informing them that we hope to establish a church in Hollywood which , in addition to religious services, would include an eduacational and social center. In order to succeed we needed their support. Fortunately, the response was very encouraging.

This was the first large collectioon for our St. George Church. Our first services where held February 24th, 1974 with Father Gaines officiating.

We are grateful to many dedicated people who, through the years, have devoted their time and money to make our church what it is today.

One of the Founders